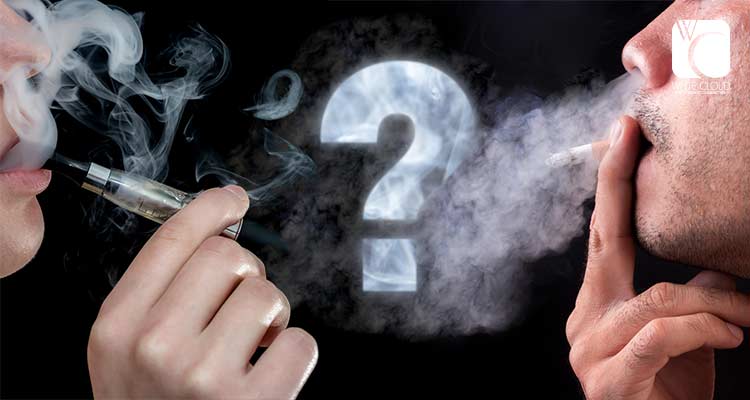 Vaping is a new trend that is still emerging in the market. It is still not as publically common as cigarette smoking but it is getting popular day by day. Still, there is a lot that people don’t know about vaping hence we will be doing a comparison of cigarettes smoking with vaping in this article to enlighten you about a few factors of both.

Smoking or vaping both have their own set of chemicals to their name and whether you take vapor or combusted smoke in your lungs, it is each going to have its own effect. The health hazards tied to smoking are more aggressively put forward than those of vaping.

The smoking process begins with the burning of tobacco which contains a lot of chemicals that burn along with it creating a chain of chemical reactions. Most of these chemicals are carcinogens (cancer-causing substances) and many of them can lead to severe health issues such as; lung cancer, cardiovascular diseases (heart diseases), bronchitis, emphysema, and so on.

Vaping is considered relatively safer to smoking because there is no tobacco burning hence no smoke production and there are a small no. of chemicals associated that have low risks. Most of the chemicals in vaping are deemed safe to consume.

Whether you choose smoking or vaping both come with their own costs, but the initial cost to purchase a vaping starter kit is greater than that of a cigarette so most people consider vape to be more expensive than smoking but that is not the case in reality. There are a lot of statistics that calculate the cost of smoking but it is variable to how much an individual smokes per day. Data collected from the vaping community displays that 2ml of e-liquid is equal to a pack of cigarettes approximately.

Cigarette smoking is increasingly being frowned upon day by day and is being restricted in the majority of places due to health and other hazards it can cause to the smoker and others around him. Taking this and the above-discussed factors into consideration, we can see that vaping is a far better choice than smoking cigarettes in terms of both health and cost.

Due to a large number of people shifting to vaping now, there are lots of products out there that are more healthy is nature as is. The fact that nicotine can be managed in e-cigarettes is the reason why they are considered to be safer. Not only that, but people can help themselves quit smoking through this process more easily as well. A person trying to quit smoking can begin with the amount of nicotine they like to take, and then can gradually start to decrease it as they go.

This is why we think that e-cigarettes should be aligned right next to the cigarettes so that people can change their outlook towards them.